GWW Magazine: The longest suspension bridge in the world: Canakkale 1915 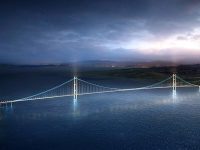 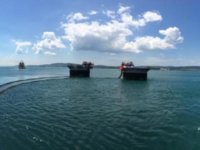 GWW Magazine: The longest suspension bridge in the world: Canakkale 1915

Grond/Weg/Waterbouw has written a nice article about building the longest suspension bridge in the world: Çanakkale 1915 bridge in Turkey. We are proud that Strukton Immersion Projects asked us to participate in this special project.

We’ve made the design of the guiding system that will position the caissons accurately at a depth of 40 meters. UPDATE: In addition to caisson Europe, caisson Asia has also been successfully placed.

Read the article below or click for the original G/W/W article in Dutch./ English translation

The longest suspension bridge in the world

Near the Turkish city of Çanakkale, construction is being carried out on the Çanakkale 1915 bridge. The new mega bridge will soon be the longest bridge in the world with a main span of 2,023 meters between the two towers. The Dutch firm Strukton Immersion Projects literally lays the foundation for the huge bridge that will be opened for traffic around 2023.

The Çanakkale 1915 bridge is part of the Çanakkale-Tekirdağ-Kınalı-Balıkesir highway project and will be 3.6 kilometers long, with another 800 meters to be built inland. With a huge main span, the new mega bridge surpasses the current record holder - the Akashi-Kaikyo Bridge in Japan, which has a main span of 1,990 meters. The Çanakkale 1915 bridge will soon replace a number of ferry services over the Dardanelles, a narrow strait along the Bosporus. The construction of the bridge has been awarded to a joint venture consisting of two Turkish and two Korean companies, which in turn engaged Strukton's expertise for the immersing of the bridge foundations.

The new bridge will soon be suspended above the Dardanelles by two pylons. "It is our task to move the two caissons that serve as a foundation for the pylons and to immerse them on location," says Peter van Westendorp from Strukton. "Both caissons are constructed by the joint-venture in a dry dock specially equipped for this project, on the bank of the strait and about 4000 meters from the immersion location. The concrete caissons are hollow, with floor dimensions of 74 by 83 meters and a height of 20 meters. Due to floatation and operational constraints, the upper part of the foundation which consists of a double walled tower with a diameter of 18 meters is only installed after floating the caissons into location and prior to immersion. The total height of the foundation is then 45 meters with four towers (two per caisson) which are protruding just above water level when the foundation is immersed. The joint venture then continues to further build the pylons."

Strukton therefore does not interfere with the construction itself. However, it does with the engineering of all facilities needed for the transport, mooring and sinking of the caissons. "We are responsible for transporting the caissons to the mooring and immersion location and are also taking care of the immersion process," says Van Westendorp. "The ballast system in the hollow structures is developed in full by us. To allow for a controlled immersion process, the foundation structure is provided with an internal grid of ballast compartments to be able to influence the position and inclination of the structure as it is being immersed. We are dealing with a tolerance of plus or minus 20 centimetres at a water depth of about 42m. Very tight!
The caissons will later on be standing on a gravel bed on the seabed that is provided by the joint-venture. Van Westendorp: "Next to the gravel bed, a guiding construction we be placed on two sides of the caisson so that we can still fine-position the caisson with jacks before touch down. Towage and coarse positioning takes place with four tugs. Two tugs are connected to pre-installed mooring anchors. The other two tugboats will be kept in position by means of their dynamic positioning system. The immersion is done by means of filling the caisson with water in a controlled way. Once in position, the ballast compartments are completely filled with water, about 35,000 m3. "Struktun has between 48 to 72 hours for the entire operation, from towing from the mooring location to the complete filling and immersion. According to plan, both caissons will be submerged in January - February 2019.