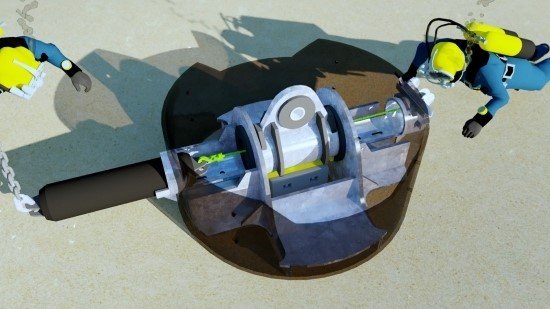 Designing a winning tender solution is a challenging and exciting task. Beating often unknown competitors and meeting the expectations of the client requires ingenuity and a focus on costs. The tender procedure was launched by the Rotterdam Port Authority (Havenbedrijf Rotterdam), which operates one of the largest ports in the world. The Port Authority needed new mooring buoy anchoring systems at several locations in the Port of Rotterdam. Together with contractor GEKA Bouw, part of the large international dredging contractor DEME, MH Poly made the winning tender design.

MH Poly designed an anchoring system that will be placed at twenty-nine different locations in the Port of Rotterdam. The anchoring pole had to be equipped with a swiveling head and should be able to cope with almost 300 tons of pulling force from ships. Most important design condition: minimal downtime and nuisance during maintenance.

With numerous years of design experience in structural engineering with steel, chartered engineering Wilco Bruijs took on this challenge. The design process started with sketches on paper and resulted after some iterations in a 3D Finite Element model of the design. After calculation resulting stresses from the pulling force, the global dimensions of the structure were established. The last step in the process was refining the design to prevent fatigue of the anchor pole head. In cooperation of PT Structural, a specialist in steel fatigue design and calculations, a number of optimizations were made, which resulted in an optimal design in a short period of time.

In synchronism with the design calculations, 3D drawings of the system were made to keep the client informed about the design procedure. Key in this process was to explain the design to the client and all the stakeholders, with a varying knowledge of structural design. To convince the client of our design, everyone needed to understand our design and the maintenance philosophy behind it.

MH Poly made artist impressions, a visualization of the construction, assembly and maintenance process. Project manager Rob Vinks of GEKA Bouw, who presented the idea at the headquarters of the Port Authority: “After the presentation I was approached by a man who told me he studied management and economics and the said that even he understood the design.”

At request of the client, a full-scale model was made. This model has been tested under water by a diving crew on ease of use. The anchoring system is placed in a large open steel tubular pile with a diameter of two meters. The swiveling anchor head, the horizontal placement system and the locking pin for the mooring buoy were tested by the diving crew, who are very enthusiastic about the design. After the full-scale test a number of minor tweaks were made to the design to achieve the most optimal solution

Smart detailing and a maintenance-friendly design in cooperation with the diving team has resulted in winning the tender procedure and the construction contract for GEKA Bouw.